Anime has always been my first love. Ever since Sailor Moon debuted in North America in the 1990s, it became my entry point into the vast and wonderful world of Japanese animation. I discovered Cardcaptor Sakura, Fushigi Yugi, Ayashi no Ceres, Revolutionary Girl Utena, and so much more. Manga followed closely behind, mostly because many of the anime I fell in love with were already based on a manga series. When homework and studying were done during my high school and college years, I couldn’t wait to spend my weekends or vacations from school diving into an anime series I was into. Now with those days long behind me, I find my anime viewing to be dwindling until a great sense of nostalgia (or boredom) nudges me to see what’s currently available on streaming.

I’ve written about how my anime watching habits have changed as I got older. I’ve called myself a casual anime fan because I simply don’t consume as much shows as I used to. The sheer amount of series and movies now available on a number of streaming platforms you subscribe to make it increasingly hard to settle on any one thing to watch. Most nights when I’m in the mood to watch something but don’t know what has resulted in feeling so overwhelmed by my options I wind up not watching anything that evening. When I finally do make a choice and press play on my remote, it takes me back to what I love about anime.

The beautiful animations, the emotional beats, the quirkiness, and the surprisingly deep and philosophical lessons you can take away from anime are some of the many reasons why I can never truly get tired of it. Of course, there are times when an anime series or movie may be a huge letdown.

Recently, I watched the 2017 anime movie Fireworks. It was actually the first anime I’ve watched in a while since A Silent Voice last year. Whereas A Silent Voice was a brilliantly done anime film from start to finish, Fireworks was decidedly not. 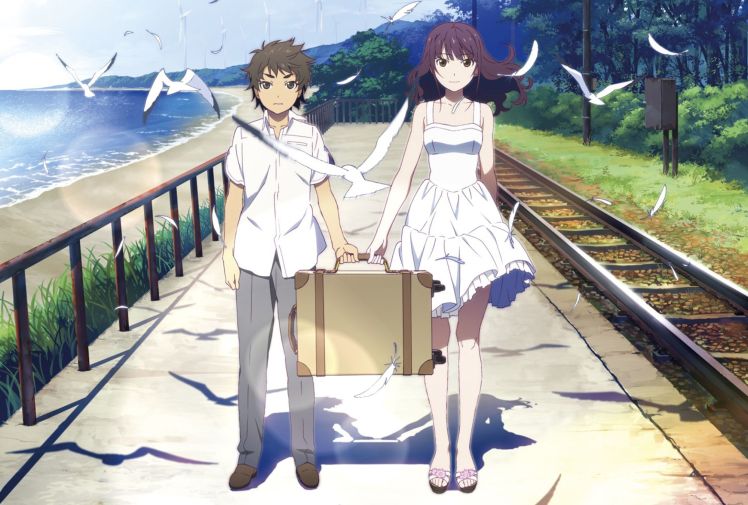 Fireworks is about a teenage boy named Norimichi who has a crush on his classmate Nazuna. A friendly race at their school pool brings these two together that eventually leads to a date of sorts to watch the fireworks in their local town. This is a really simplified summary about the movie, but without going too deep into spoilers this seemingly slice of life anime movie introduces a time travel element about mid-way into Fireworks.

The film was tough to like. I struggled to connect with the main characters Norimichi and Nazuna, and couldn’t find anything interesting about them to really care where these characters ended up or if their romance was something to invest in. Then there was the way the movie began. I was easily irked by the lingering camera angles of Nazuna splayed out in her own bed in a not so innocent way followed by a later shot of Norimichi’s teacher’s ridiculously sized breasts that seemed out of place with the rest of the movie. I guess I’m starting to get quite cranky and less patient in my old age, knowing that such shots are common and widespread in a lot of anime, but Fireworks really wasn’t my cup of tea.

Although Fireworks might not have been the best movie to dip my toe back into anime when the mood struck, it served as a reminder to check back with my old friend, my first love, more often than I have been. Anime has always been a comfort to me when times have been difficult or particularly challenging. It’s nice to know there are still plenty of gems to uncover, no matter how old I get.