Deciding what new shows to tune into every fall season is often met with a little bit of caution and a dose of pickiness for me. There are so many options and ways to watch TV now that it can be overwhelming to pick a show and stick with one. When I’m not already devoted to one series, I often wonder if giving a new show a shot is worth the time and effort it takes these days to watch anything at all. Dare I open my heart up to a potential new favorite? Well, open my heart up I did and I’m glad I did too. Here’s a short list of what shows I’m absolutely loving from the 2016 fall season. 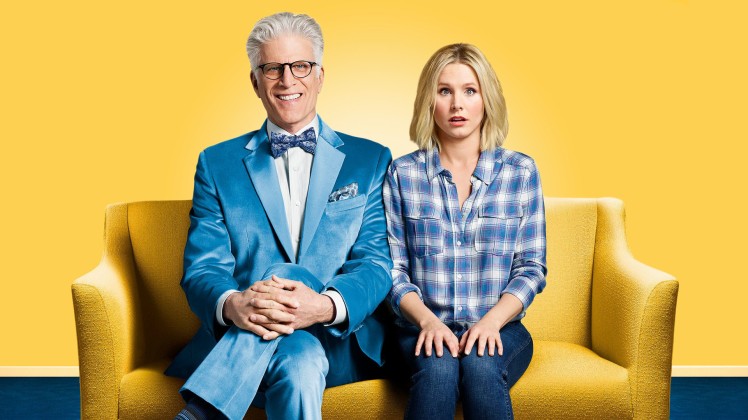 The Good Place. NBC’s new comedy from the creator of The Office and Parks and Recreation stars Kristen Bell as the morally questionable Eleanor Shellstrop, who dies and ends up in the “good place” through a case of mistaken identity and a faulty algorithm system. What makes this a really great show to watch is seeing an unlikable character going through the process of earning her right to stay in the show’s version of heaven filled with frozen yogurt shops on every corner and living the rest of your blissful days with your soulmate. If you think learning to be good isn’t hard, then you haven’t met Eleanor. Kristen Bell, Ted Danson, and the other cast of the show makes The Good Place a worthy new entry to spend half an hour of your time to smile, laugh, and watch some potentially great character development for everyone involved.

Black Mirror. Netflix’s most recently talked about show and British television import from the mind of Charlie Brooker comes a satirical and often dark commentary about technology and modern society as a whole. Each standalone episode critically assesses everything from our obsession with reality TV shows to how YouTube and social media dominates much of our daily lives. It’s like The Twilight Zone for a new generation. I’ve only watched and finished the first season and I’ve enjoyed what I’ve seen so far. I always find myself a bit unsettled and contemplative after each episode. While the stories told in Black Mirror are exaggerated, a bit silly, and at times feels like science fiction, the themes and messages do resonate with you and some episodes might warrant a repeat viewing or two. I’m looking forward to hopefully binge watching the other two seasons.

This Is Us. NBC’s new family drama starring Mandy Moore and Milo Ventimiglia switches between the past and present to follow Rebecca and Jack Pearson, as they raise their kids Kate, Kevin, and adopted son Randall in the 1980s and seeing these same kids go through the ups and downs of adulthood at age 36, the same age their parents started having a family. Created by Dan Fogelman (Crazy, Stupid, Love), I was kind of on the fence about watching this show. I initially thought it’d be the usual dime a dozen family dramas already dominating network television, and in a sense it is, but the show manages to have thoughtful and well-written characters you want to keep learning about episode after episode. The beating heart of the show are the characters and their relationship to each other. At times, you don’t really know what to expect from each episode because the writers somehow throws a curve ball at the audience in surprising ways. I haven’t watched too many family dramas, at least not since 7th Heaven and Everwood, but these twists and how they skillfully weave them into the larger narrative and into the intimate moments of the characters’ lives are something I haven’t really seen done on television before. This Is Us is so emotionally engaging you’ll find yourself laughing one minute and nearly bawling your eyes out the next. As an aspiring writer, I’m taking notes from this show on how to write deep and really complex characters.

These are the biggest highlights for me from the fall television season. What are yours? Let me know in the comments section if there are other shows I’m missing out on or you have seen any of the ones I’ve mentioned.