We all put in time when we can to do what we love most. Deciding what fun, leisure hobby I want to spend a free weekend on is a constant struggle that hasn’t changed with the passage of time. I always think it’s a personal victory when I manage to do a little of everything in one weekend: read a book for an hour, play a video game for two hours, or write my novel for three hours. It’s a balancing act I continue to learn and work with every day. Despite finding a decent amount of time to play the game I choose for my monthly challenges lately, you still want to be able to savor your time with it. 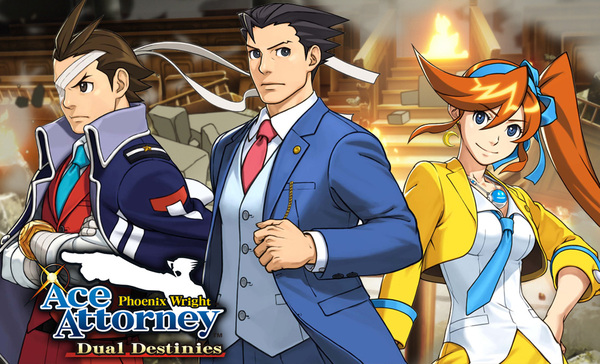 Phoenix Wright: Dual Destinies is a game I’ve wanted to play since it released back in 2013. I wasn’t ready to play this game for the Nintendo 3DS at the time because I was still finishing up the older games for the Nintendo DS. Now that all those have been experienced and completed, I’m excited to play a new and updated Ace Attorney game on the current handheld system.

Game controls still remain the same with small improvements to make Dual Destinies feel more organized and streamlined compared to the series’ earlier counterparts. For instance, investigating certain parts of a crime scene is immediately marked with a small check mark after you hover over a chair or bookcase to indicate you’ve searched that area already. The older Ace Attorney games don’t have this tiny feature and sometimes I’d forget if I investigated that area, especially if I put away the game for a long period of time. It’s extremely helpful and it ensures you don’t waste any additional time looking into a spot you already checked.

One of the cases in the game later adds a ‘Notes’ tab to help you keep track of your objective in the game. It’ll have a brief memo either telling you to visit this person for questioning or go to this room to search for more evidence for your case. It’s another example of better organization within the game that the older titles don’t have. I cannot tell you how many times I had to hop around places or try talking to people again, who I’ve already spoken to, when I can’t figure out what I’m supposed to do next to progress the game. It sometimes left me stuck until I had to consult an online game guide to figure out what I’m missing. Dual Destinies provides some changes to the Ace Attorney series, but still keeping what always worked for this hugely popular visual novel game.

The way Dual Destinies uses the 3D feature on the 3DS makes the images and animations pop. The graphics seem to look sharper and the colors more vivid than the older games. Most of the time I keep the 3D function on my 3DS turned off, but with games like this one, I want to experience it with the 3D turned on. The addition of anime cutscenes and voice acting in Dual Destinies is another welcome change for this entry and reminded me why I got interested in playing the Ace Attorney series in the first place––it resembles an interactive anime I can watch and play at the same time.

I’m having a blast with this game, but as this is a report, I have to admit I haven’t met my end of the month deadline. I only managed to finish the first case, Turnabout Countdown, and I’m in the process of playing through the second case The Monstrous Turnabout. Playing any Ace Attorney game will take time to finish and the last thing I want to do is rush through it for the sake of completion. Rather than start a whole new game for the next month, like my time with Apollo Justice, Dual Destinies will be an extended video game challenge until I finish it. I’m finally catching up to the current games released in North America and I have no intention of quitting now when Spirit of Justice is within my reach. Until then, please check back in October to see how far I get with Dual Destinies!