You would have to be living in a bubble for much of the summer if you haven’t seen or at least heard of Stranger Things, Netflix’s creepy sci-fi show about a small town in Hawkins, Indiana that find themselves in the middle of weird and unexplained activity after local boy Will Byers mysteriously disappears. The show is Netflix’s explosive hit for the streaming service and one that has been widely talked about for months by critics and fans alike. The show is set in the 1980s and has been largely compared to works by Steven Spielberg and Stephen King who dominated that decade in entertainment. The show’s creators, the Duffer brothers, aren’t shy about taking what they loved about the ’80s, blending them all together, and creating something that feels like we’ve seen it before but still feels different. What makes this show highly successful is appealing to people’s sense of nostalgia, while also telling a strong and tight story that will captivate audiences and keep them talking about it until Season 2’s release next year.

Stranger Things is undeniably an homage to ’80s films we either grew up with or watched at some point in our lives. As you watch each episode, it’s almost guaranteed you’ll see the similarities to films you may have loved from that decade. The friendships and coming-of-age aspect of the show between lovable, Dungeons & Dragons geeks Mike, Dustin, Lucas, and Will calls to mind the movie Stand By Me, based on Stephen King’s short story The Body. Or a group of kids setting out on an adventure to find their missing friend Will is very reminiscent of the adventure seeking kids from the movie The Goonies, except the kids from that movie aren’t searching for a missing friend but pirate treasure. The creepier and more horror feeling parts of the show have also drawn comparisons with Alien, The Thing, A Nightmare On Elm Street, and Carrie to name a few. It’s clear the creators of Stranger Things knew their source materials well and are huge fans of the movies they drew their inspiration from. If watching Stranger Things has left you hungry for all things ’80s, Vulture has compiled a list of films referenced or used in some way on the show.

The show is 8-episodes long making it really easy to binge watch in a week. Despite the show’s short length, the Duffer brothers succeed in what I find incredibly difficult to do when it comes to writing stories in general––tell a compelling story that develops each of their core characters’ arcs and overall mysteries, while resolving the main story threads that feel satisfying within the length restrictions and leaving some unanswered questions for viewers to speculate on. In many ways Stranger Things is a lesson for writers on how to tell a good and concise story. It’s a balancing act in knowing what to tell, how much to tell, and how to keep the story moving forward without meandering from the plot too much. 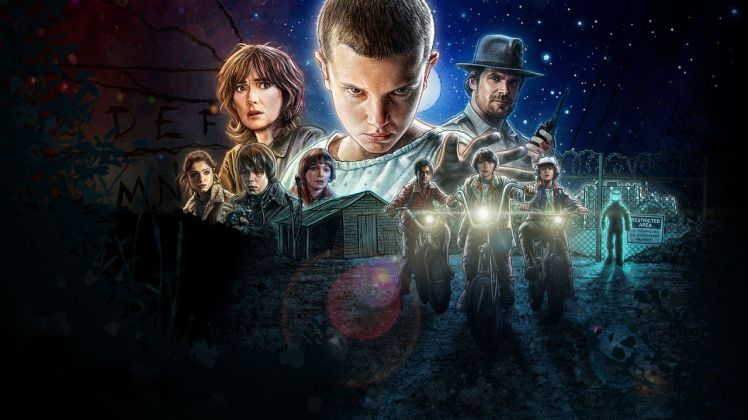 There’s a lot introduced in Stranger Things, such as the monster or Demogorgon, as Mike and his friends like to call it, the other dimension known as the Upside Down, where Will is held captive, and the enigmatic Eleven, a young girl with telekinetic powers Mike and the gang meet in the woods when searching for Will. That’s a lot of mysteries to sort through within 8-episodes, but the answers you do get won’t leave you feeling frustrated or confused. Not that there aren’t any questions left to be answered. The show, especially the final episode of Season 1, answers your questions but offer up many more. I think if Stranger Things didn’t get a Season 2 and Season 1 is all there is, the questions we’re left with are the kind you can leave up to your own interpretation. Thankfully, Season 2 is happening and hopefully what remains unanswered will be answered in the next season.

As much as I enjoyed the creepy, mysterious elements of Stranger Things and I found myself asking plenty of questions while watching it, the best part about watching Stranger Things are for the kids. Not only are the kids well cast in their parts, but the friendships between Mike, Dustin, Lucas, Will, and even Eleven feel natural and believable. I’m always engrossed in watching how far a character comes in their own personal journey by the time you reach the end. Each kid goes through their own growth process and learn something valuable at the end of it.

Lucas is one of the few characters I found to be annoying at the beginning of the show. He starts off as a hot-headed, stubborn kid who constantly puts down Eleven and is downright mean to her. He’s the sort of kid who won’t really listen to reason no matter how hard you try. It’s only towards the end of the show you begin to understand where Lucas is coming from. Being Mike’s longtime best friend, the introduction of Eleven into the group threatens Lucas’ place as the number one best friend in Mike’s life when he starts spending more time with Eleven, an observation Dustin points out to Mike. Combine that with Lucas’ concern for finding Will and not really trusting Eleven and you pretty much have a kid who’s constantly irritated and unfairly taking out all his frustrations on Eleven when he should be working through his issues with Mike. Eventually, Lucas and Mike sort out their differences and their friendship is solid again. Lucas even finally accepts Eleven as a friend and apologizes to her once he knows he’s not being replaced in Mike’s life and Eleven has proven her fierce loyalty to protect her new friends at all costs. This is just one of many examples in the show of characters growing significantly from where they were at the start of the story.

I’m really just scratching the surface of what makes Stranger Things a great show to watch. There’s just so much ground to cover with this show like theories about the monster, how Dungeons & Dragons plays a really important role on the show other than a one-line reference, what the last few scenes of the ending means, or who Eleven is. Rather than diving deep into spoilers with this discussion, I encourage anyone who hasn’t seen the show yet to actually go watch it. Usually I’m skeptical about most things that are widely hyped up, but I promise this show isn’t overly hyped. It’s the real deal.

12 thoughts on “Stranger Things: An Overview Of Netflix’s Surprise Hit Of The Summer”