All good things must come to an end and this phrase couldn’t be more true when it comes to playing my favorite RPG Dragon Age: Inquisition. Last month, I finished up what remained of the extra content Bioware released for their 2014 hit video game. Spending more extra hours on Inquisition is something I can’t complain about if it gives me more time with my Inquisitor and the characters I have grown to love. Whether the DLC is worth the extra money to spend on is a matter of perspective. 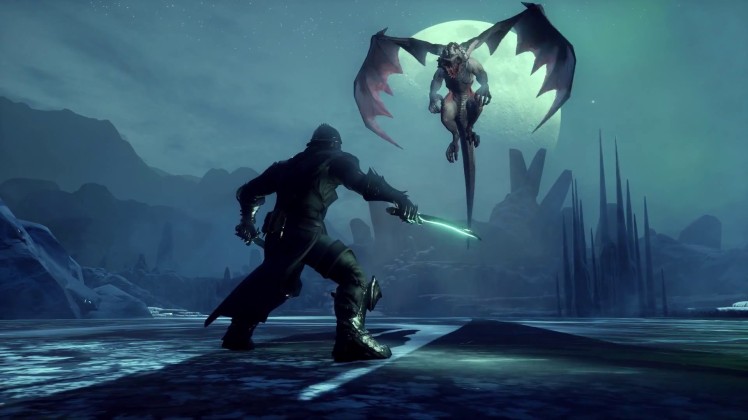 The first of three DLC content to be released by Bioware, Jaws of Hakkon gives players a new area to explore, some new sidequests to complete, and a subplot about the last Inquisitor named Ameridan.

The Good: As I explored the wintry wilderness this DLC presented me with, I couldn’t help but notice the settlers at an encampment you discover, who call themselves Avvar, felt like a moment taken out of Game of Thrones. The wintry woods and the way the Avvar dressed themselves calls to mind the wildlings from the Game of Thrones series. I don’t know if this is mere coincidence or the writers borrowed an idea from the TV show and books, but it was interesting to see that similarity going on in this DLC. I enjoyed learning more about Ameridan and uncovering the mission he was on until he died before he had a chance to complete it.

The Bad: I wasn’t too thrilled to discover this new area had unlocked more shards to collect. As it has been quite some time since I’ve completed this DLC, I believe the shards were meant to unlock a new door in this area, which I don’t think I ever completed. Honestly, collecting all the shards when the game came out on release day was torture enough. I barely have the investment to start this whole “needle in a haystack” search AGAIN. The other thing I wasn’t happy about was seeing ANOTHER dragon. At some point in the game, you have to kill a dragon to complete the Ameridan questline. If there’s another thing I haven’t liked about playing Inquisition it’s slaying dragons. Maybe in the beginning it might be fun to do a little dragon hunting, but when the developers decide we need more than 10 dragons to up the challenge level, and to live up to the game’s title, it starts becoming one dragon too many.

The Verdict: By the time I completed this DLC, I’d say I was satisfied with the overall experience. The Ameridan plotline was engaging and the introduction of the Avvar into the Dragon Age world adds another possible story thread to explore in future games. Is it worth the purchase? Maybe, if you crave another chance at exploring new territory after finishing your first run with the game. 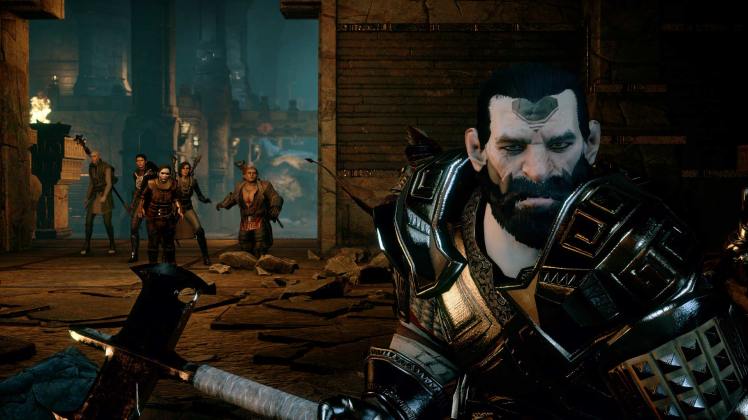 The second DLC to be released by Bioware, The Descent takes us back to the Deep Roads for the Inquisitor and the gang to uncover the root cause of earthquakes threatening to collapse the entire structure.

The Good?: I’ll be honest with you––there’s very little I enjoyed about The Descent. Maybe it’s because out of all the places in the world of Dragon Age I like least in exploring is the Deep Roads. I found this particular DLC largely boring, getting deeper and deeper into its cavernous walls and fighting a bunch of monsters along the way, and it felt like this DLC was more level grind than actually contributing anything significant to the lore of Dragon Age. The only thing I can say I liked was the introduction of new characters Shaper Valta and Renn, member of the Legionnaire of the Dead. Luckily, Bioware always manages to write good characters, regardless if they’re supporting or majors.

The Bad: The big reveal of who or what was causing the earthquakes just wasn’t as exciting as I thought it would be. Another major problem I had with this DLC, which I didn’t feel I had with Hakkon, was the level of difficulty fighting off armies or monsters in this game. The challenge factor felt largely uneven to me. I managed to play most of Inquisition on Normal without changing the difficulty setting much, except in some extreme cases, like tricky boss fights. The challenge in this game was really unforgiving at times. Fighting against hoards of enemies, even if your characters are leveled up pretty high on Normal, was damn near impossible to win against. I’d either max out my healing potions, making it difficult to keep my Inquisitor and party alive through another wave, or the last few enemies left to kill manage to end whoever was leftover in my party when the end of a fight was really close at hand. I had to bump the setting down to Casual many times to get through this. I like challenges, but this is beyond ridiculous.

This brings me to the final boss fight in The Descent. If the enemies were already unbalanced, fighting the boss in this DLC was not fighting fair at all. After dying several times on both Normal and Casual, I had to Google the solution to this fight. What was I doing wrong? Apparently, the key to winning this fight was switching to the tactics based gameplay mechanics. I haven’t really used this method since Origins, so having to use it in this fight was a bit of a stumbling block for me. This suggestion proved to be the best and only way to get through this hard boss fight on Casual. I was so focused on micro-managing my Inquisitor and making sure the rest of my party didn’t die that I didn’t realize I had whittled away its health to nothing and the fight was over. Although I found a method that worked, getting the health down to nothing on Casual still took more time than I would have liked. This was probably one of the worst boss fights I’ve ever encountered and plenty of people on game forums have complained about this fight too.

The Verdict: I don’t think anyone will be missing much if you didn’t get The Descent. As I’ve mentioned before, the DLC doesn’t really add anything to the lore of Dragon Age. It does leave it open to possibly have one of the newer characters reappear in future games, but I don’t think the DLC was worth the amount of money it costs. It’s skippable, at best, unless you want an excuse to level grind and try your hand at fighting against overly powered enemies. 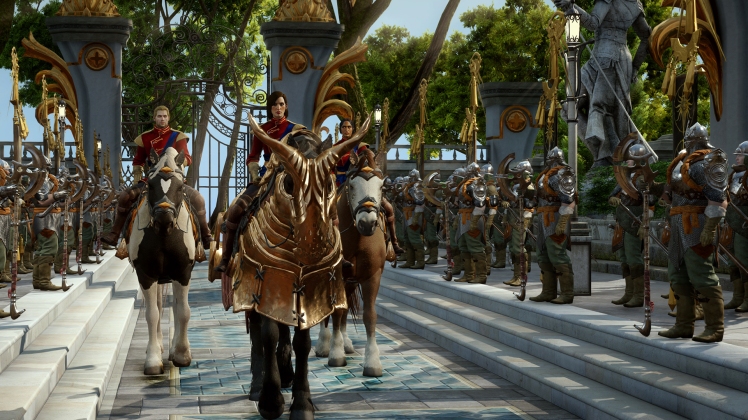 The final piece of DLC to be released and probably the most important to the overall story, Trespasser is the epilogue to Inquisition. Taking place two years into the future and after the defeat of Corypheus, the Inquisitor is called to the Winter Palace in Orlais to appear before the Exalted Council to decide the fate of an organization he/she put together. Should the Inquisition remain in power or disband? The choice is truly up to you.

The Good: Similar to how Mass Effect 3 handled their ending by releasing the Extended Cut DLC, Trespasser serves as the final goodbye to your Inquisitor and their band of merry men and women, as well as tie up story threads raised at the end of the main game. There’s also an incident at the Winter Palace that lets the Inquisitor and your chosen companions suit up for one last hurrah before everyone goes their separate ways to start new chapters in their lives. I had the best time playing this DLC over the other two. It also helps that this is an important piece of story DLC you need to have if you want your questions answered and a hint to where the next Dragon Age will take place.

The new dialogue and interactions with your companions and advisors are top notch as always and it’s really fun to learn what everyone has been up to in the last two years since the defeat of Corypheus. It’s also further enhanced by the scattered letters you pick up around the Winter Palace. It details what every single character has done with their lives or what new jobs they find themselves in. Those who have romanced Cullen in Inquisition, like I have, will be pleasantly surprised by a special cutscene, depending on what dialogue choice you make, in this DLC. All I will say is Bioware certainly does listen to their fans and frequent the message boards often to deliver what their fans really want and hope for. All those fanfictions/fanart of Cullen and the Inquisitor really does pay off. And Cullen gets a Mabari hound! Too cute!

The Bad: I personally don’t have a lot of complaints with Trespasser. The only issue I have is the same as The Descent, enemies are way too overpowered and doesn’t seem to be at the right challenge level as your Inquisitor. I’m not the only one with this issue, as I have found out in a few discussion forums. Some felt your run-of-the-mill baddies were much too hard to play even on Normal. I unfortunately kept the difficulty setting on Casual for the rest of the time I played Trespasser. I was in no mood to stress myself out struggling to beat minor enemies when I could be progressing the story and reaching the end.

The Verdict: If there’s one DLC you should purchase out of all the three released for this game it would be Trespasser. Not purchasing Trespasser is like having the final few pages of the end of a book ripped out––you won’t know how it ends. Making one final decision, keeping or disbanding the Inquisition, is worth experiencing. At first I thought I might want to keep the organization together, but as I kept playing through the DLC, I realized the organization was better off disbanding. It was a choice I felt was right for the canon of my mage Inquisitor Eve Trevelyan and it seemed like this chapter in her life was over. She did her part in saving the world and she deserved to settle into a quiet life with her Commander and their new Mabari hound. I like the image of them living in a small cottage somewhere in the country. It’s my perfect happy ending for my Inquisitor.

The journey with Inquisition may have ended, but like all the previous Dragon Age games I’ve played, it’ll always have that feeling of never really wanting it to end but you’re still satisfied with where all the characters end up. Until the next time I can do a second playthrough with all three games or when a new Dragon Age game gets announced, thanks Inquisition and Bioware for the awesome memories and feels!