The best stories told are the ones that manage to hold and keep your attention until the very end. All writers and lover of stories know this. It’s what separates a good story from a bad or mediocre one when it remains firmly imprinted in your mind for months or even years later. Playing video games with an emphasis on story and narrative is no different. You have to have a really strong plot and characters to keep players playing. What makes a story even better to play is when you have no idea what direction it’s headed in or it’s full of surprises you never see coming. Life is Strange is one recent example of a video game that manages to keep its players engaged and invested in the story and fates of their characters.

Life is Strange is an episodic game developed by Dontnod Entertainment and published by Square Enix. Max Caulfield is the main heroine of the game, who starts off as a simple high school student attending Blackwell Academy in the fictional small town of Arcadia Bay, Oregon. Navigating the often confusing and turbulent years of being a teenager is rife with its own set of challenges––getting good grades, mean popular kids, and making friends. When Max thinks she’s going to have a normal and uneventful high school experience, she suddenly finds herself adding time traveling powers to the list of extracurricular activities she has to deal with outside of school. After unexpectedly saving and reconnecting with her old best friend Chloe Price from a near death situation, using her newfound gift, Max has to figure out how she got the ability to travel time, why she has this ability, and how she can possibly use them to avoid an ominous event she keeps seeing in her nightmares.

Similar to the Telltale Games formula, Life is Strange has players making decisions as Max with each small and big decision having its own set of consequences later in the story. With the added element of time travel, you can rewind a key decision making scene to see how certain choices will play out in that moment. How these decisions effect long-term and future events in the game isn’t exactly clear unless you keep playing the game. What makes this video game a step up from Telltale’s episodic games is seemingly smaller decisions you don’t think are important, like deciding whether or not to answer your cell phone when a friend is calling, ends up dictating the success or failure of how a dire situation plays out in a later part of the game.

Decisions made in Telltale’s games may show some slight differences in how a scene or conversation unfolds, but it usually leads to the same place every time. For instance, The Walking Dead may have you trying to avoid the death of a particular character but it seems like no matter what you do, the character will die every single time. Life is Strange will eventually lead you to the same major, and oftentimes, catastrophic scene to push the story forward as the developers have written it, but how you arrive there will be different for every player playing the game. For example, one particular character will actually live or die based on your decisions and it will color the rest of your game experience. To further understand how the decision process works in this game, Venture Beat wrote a great article about how the developers keep track of the different ways one scene can play out based on what players did in previous episodes and what response options they choose in the moment. This is why the game can be surprisingly complicated and unpredictable.

Without spoiling too much of the game, Life is Strange tackles serious issues such as suicide, bullying, and drug abuse. Amidst all of that, we have a sci-fi element added into the story where Max explores the perks and major pitfalls of what it is to be able to travel back in time to “fix things.” There are overarching themes in the game of every action has a reaction and people may not always appear to be who they say they are. You may think a game about a bunch of high school kids messing around with time travel may not offer much in a way of an interesting story worth playing, but each episode manages to build upon the mysteries surrounding Arcadia Bay and its residents and the twists and turns thrown along the way to keep your head spinning. One question may get answered, but more have a way of cropping up as you uncover the darker and eerier side of Max’s small town. Life can be strange, but it can be surprisingly too close to real life for a video game, making it really unsettling to play. 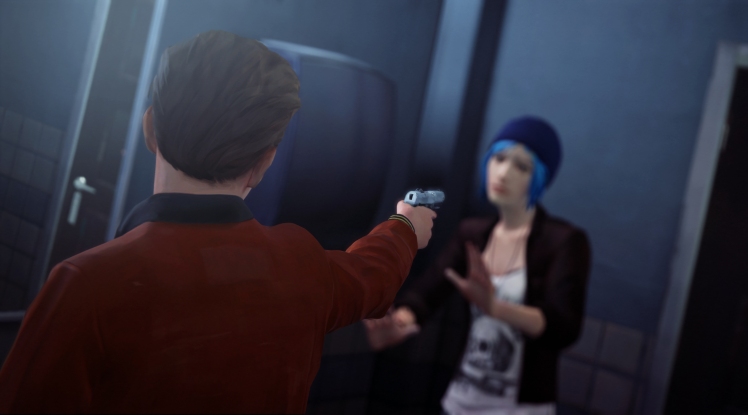 There are times when the episodes in this game are slow on the pickup. There are quiet moments when it’s just Max and Chloe being teenagers and hanging out in Chloe’s room listening to music and reconnecting  with each other after a long period of losing touch as friends. Then seemingly out of no where, the action begins to pick up and Max and Chloe find themselves in situations, such as coming face-to-face with a borderline psychotic student pointing a gun at their faces. No matter what the situation is, it’s clear that things can and will escalate quickly before the player has a chance to catch a breath.

The biggest strength of the game is its ability to keep a player guessing. Just when you think you have someone or a situation all figured out, you end up finding out how wrong you are. Episodes 3 and 4 of the game has left many players with their minds blown based on articles and a few discussion forums I’ve lurked in. As the game awaits its final episode to tie up all the loose threads and revelations revealed over the course of the story, fan theories and speculations are running wild with how it’ll end. Episode 4 has people going back to the beginning of the first episode to see if the writers left clues from the very beginning about one particular character who turned out to be not the person they presented themselves to be to both the player and Max.

Storytelling that manages to present something to people in a certain way and then turn around and pull the rug right out from under you is the best way to keep them invested. It makes you recall and think over the events carefully that led up to the reveal and it ramps up your excitement to continue further to see what’s in store for the characters. Life is Strange may not seem like much on the surface, a video game about high school teens and their every day dramas, but look closely and you may realize you’re missing out on something really good.

5 thoughts on “The Element Of Surprise: The Episodic Storytelling Approach Of Life Is Strange”