A key component in video games or any kind of media we enjoy to partake in begins with a writer and a story. The characters and the world they exist in wouldn’t be possible without one person or a team of people in the writer’s room brainstorming and building the kind of stories they wish to see. In order for a story to have life, you’ll need to know the history of the world you’re creating, the personal struggles and triumphs of your characters, or the current issues concerning their world. Playing video games tend to reveal most of what you need to know as you experience the game. The rest that isn’t central to the story often wind up in a game codex.

Game codexes are often found in the game’s menu. They feature most prominently in RPGs and some open world games. They offer a wealth of information from intimate profiles about the supporting characters you meet along the way to the geography of a place you just visited. These codexes further enhances your experience with the game by making every aspect of the characters and world as tangible and real as it can be. Despite the effort and painstaking details writers often go through to create the best story possible, these efforts may go unnoticed.

Depending on how invested you are in learning the story, characters, and world, you may want to read every codex entry you unlock as you progress in your game. If you prefer to simply play the game and are satisfied with the information you get in the game itself without going back and reading every codex entry, it in a sense ends up being work writers may have wasted their time on getting right and keeping consistent to their world and characters.

Understandably, our relationship to a game will be different for each player. Some would rather slay dragons than spend a good hour or two of their lives reading a digital sized version of a novel. Dragon Age and Mass Effect are guilty of having an endless stream of codex entries to read and sift through. It demands a lot of our time and investment to read all the information the writers and developers made available to the player, if they choose to look at it. Maybe everything about the game you’re playing is so fascinating you’re just hungry to consume everything and anything pertaining to the story and its characters.

Admittedly, I’m one of those players who will only take the time to read a codex entry or log if I’m really in love with the game. For example, Dragon Age: Inquisition is a behemoth of a game with an equally extensive and overwhelming collection of codexes for you to read. It’s so huge I haven’t even been able to unlock or find every single codex entry in the game. During the time I played Inquisition, I took the time to pause the game and read every single codex entry I newly acquired. This often took anywhere between 15-20 minutes of my time. This obviously took time away from me exploring the new area on my map or completing missions with my Inquisitor, but I was dedicated and a huge super fan of the series. 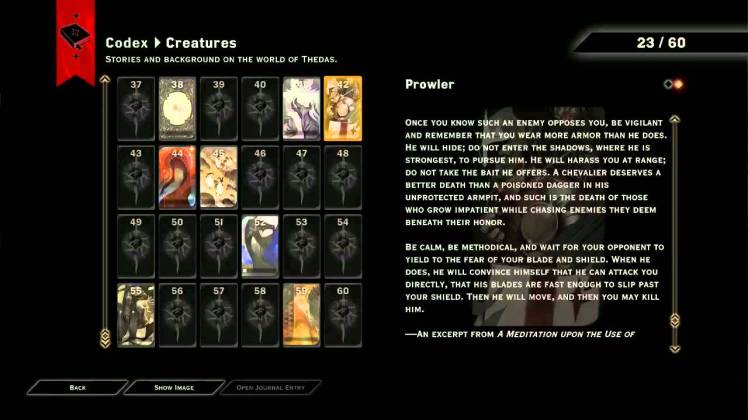 I can’t think of a game I played in recent memory where I ignored codex entries or story related journal logs I have collected. I know sometimes my own attention span can be short and I doubt I’d go out of my way to read the extra story information in the same way I do for Bioware’s games. Dragon Age and Mass Effect are special exceptions, of course, but like anyone who finds time to play video games, you much prefer to spend it actually playing the game than reading. If I wanted to read I’d pick up a book, right?

Being an aspiring writer and storyteller myself, I often think about the time and work the writers for these codexes put into giving players a complete experience. The purpose of telling stories is to pass them on and share them with a wider audience. Building a world and creating characters from scratch is no easy task. You want them to be interesting, complex, and evoke a strong response from people. The biggest goal for a writer is to make a story along with their characters unforgettable. Why else are we able to recall a video game or book with so much clarity even after it has been months or years since you’ve played or read them? You definitely don’t remember lackluster games or books that hasn’t effected you in some way.

I almost feel guilty for not reading the codexes for every single game I play because I know how hard these writers work at fleshing out the world and characters they’ve written. Maybe it’s our current struggle with short attention spans as a result of having too much technology and options at our disposal, but give me a game I can easily fall in love with, I’ll make the time, effort, and commitment to read everything the writers and developers include in their game. It’s a testament to the great work they’ve done.

Do you take the time to read game codexes? Does it help enhance or distract you from experiencing the game?

11 thoughts on “It’s All In The Details: Video Game Codexes”