If you had a time machine and had the chance to go back in time and do something differently, would you do it? The anime Steins;Gate explores this question in-depth and is the overarching theme of the entire series. Every action has a reaction and every action has consequences. An action that seems small and inconsequential at the time ripples into something much bigger and gravely serious much later. Steins;Gate is like a cautionary tale of why it’s never a good idea to mess with the very fabric of time itself, as it’s like a tapestry––undo one single thread and the whole thing comes apart at the seams until you’re left with trying to desperately piece it back together again, one single stitch at a time.

Steins;Gate centers around Okabe Rintaro, an eccentric college student who’s delusional, proclaims himself to be a mad scientist (sometimes introducing himself as Kyoma Hooin to others), and likes to conduct experiments in his “lab” with his best friend and fellow colleague Daru Hashida. It’s through these experiments that Okabe realizes he’s in possession of a microwave that can send information through time using a cell phone. Joined by childhood friend Shiina Mayuri, brilliant neuroscience researcher Makise Kurisu, tall and shy Kiryu Moeka, an effeminate boy named Urushibara Ruka, maid cafe worker Faris Nyannyan, and time traveler Suzuha Amane we have key characters who are each significant to the overall story.

The first few episodes start off slow and seem to show insignificant moments in their daily lives. Tests are still run on the microwave time machine and seemingly innocent text messages or D-mails, as the characters call them, are sent in time and alter minor things certain people want undone. However, only Okabe seems to have the ability to remember the previous world line and is able to see what’s different about the new world line everyone is in, while others around him have no recollection of the subtle change in their own world. What’s the harm in simply wishing to alter a tiny decision your past self or someone close to you has made, right? As Steins;Gate points out in later episodes––a lot can go wrong and will.

When Okabe, Kurisu, Daru, and Mayuri find themselves surrounded by armed assassins known as Rounders in Okabe’s apartment, led by none other than Moeka to extract the now perfected time machine, Okabe experiences the serious consequences of messing with the past which ultimately messes with the future. After witnessing Mayuri get shot in the head by Moeka, deeming her expendable and not necessary to take into custody, the true story and themes of Steins;Gate truly shines. The rest of the series becomes about Okabe’s desperate attempts to prevent Mayuri’s death. As Okabe quickly finds out, saving Mayuri’s life by going back in time to just before it happens isn’t as simple as it sounds.

Every time Okabe tries to do something differently (tells everyone to clear out of the apartment, takes Mayuri to a different place around the time she’s supposed to die, etc.), Mayuri still somehow dies at the exact time it’s predicted. The only thing that changes is how Mayuri dies. If she isn’t shot by Moeka, Mayuri is killed either by getting hit and run over by a car or is accidentally pushed onto the tracks of an oncoming train. Okabe keeps traveling back in time only to witness Mayuri’s death over and over again in a nightmarish loop he can’t seem to break. He eventually enlists the help of Kurisu in each time travel trip, explains the situation to the “new” Kurisu in the new world line, and she helps him try to crack the code of how to save Mayuri.

The only theory Kurisu can come up with is for Okabe to keep traveling backwards in time to undo every single D-mail a person has sent or undo actions that may have interfered with what should have originally happened and has thus altered their world line in some way by using the time machine. Once this is done, they’ll be able to track down an old PC and use it to hack into shady organization SERN’s system that alerted them to Okabe and his gang about their time machine and then erase the very first D-mail that was ever sent back in time. The anime then becomes somewhat of a detective story, cracking the case of what a person’s D-mail said and who they sent it to. However, simply asking the original sender to undo the D-mail isn’t without its own set of complications. Take for instance, Ruka. In the original world line, Ruka is a boy who happens to look like a girl and truly wishes to be a girl. Somehow, Ruka believed in an old wives’ tale that if his mother ate more vegetables during her pregnancy it will somehow make the fetus more into a girl instead of a boy. Okabe is skeptical that a D-mail telling Ruka’s mom to eat more vegetables while pregnant with Ruka will somehow magically change him into a girl but he relents. When Okabe ends up in the new world line, he discovers that Ruka has indeed become a girl just like he always wanted. For Okabe to tell the now female Ruka the real truth and convince her to undo her D-mail to go back to being a boy in a bid to save Mayuri’s life is difficult for Ruka. She’s happy with being a girl and she knows she can freely have feelings for Okabe without it feeling wrong or impossible if she’s a boy.

Ruka’s example shows how messy screwing with time can be. Ruka gets what he wants, but it’s at the expense of Mayuri’s life. Being in this particular world line has set an inescapable fate Mayuri seems to live, which ends in her own demise. As insignificant as Ruka’s D-mail may seem along with Faris and Moeka’s, it somehow has a ripple effect over the world at large in ways they never could have imagined. By leaving their original world line, it seems everyone has tampered with what should have naturally happened in the first place. Changing what has already been done in their past is messing with the natural order of things, like Ruka being meant to be a boy or Faris’ father being meant to have died in an accident when she was a little girl.

The anime raises the idea of fate vs. free will. How much of our life are we really in control of and how much of it is fate? We already know time is not exactly linear as we like to think it is. It contains an infinite amount of possibilities and past, present, and future are all happening at the same time. Or something like that. I’m not a scientist and I can’t even begin to wrap my head around this stuff either before I can’t keep all these concepts straight. By Okabe and his friends messing with their original world line, they end up tapping into a new world line, another possibility of how their lives could play out. We have a world where Ruka is a girl and not a boy, Faris is not running and working a successful maid cafe but is happily spending her days with her father, Moeka is a cold hearted agent who works for a shady organization, and Mayuri’s life is tragically cut short. While Ruka and Faris may be basking in the happiness of getting what they want, by either changing their actions or the actions of those closest to them, Moeka and Mayuri aren’t so lucky. By Okube staying in the new world line, it makes Mayuri’s death an inevitability he nor she can’t escape.

Somehow, Mayuri dying in this world line makes it fated to happen. Why is it Okube can’t avoid Mayuri’s death and in their original world line she isn’t in danger of dying to begin with? The answer is it’s the actions of everybody else who has changed time in some way with their D-mails. By doing something differently, it somehow manages to set off the following chain reaction of events that lead up to Mayuri’s death. I think in some ways, it’s a combination of both free will and fate that make up the circumstances the characters find themselves in.

We choose whether we go with A over B. Or take one road in favor of the other. What we never know is what impact our decisions will have on ourselves or others later in life. If we continue on the path we’re on, in essence, what comes after may be “fated” to happen as a result of a prior decision. Maybe by choosing not to move away for college and attending a school closer to home, you meet your best friend at this college and this “fated” meeting may not have been possible if you chose to move away.

For Okube and the rest, sending the D-mails they send in time changes the very fabric of what should have remained as it was. They say things happen for a reason, and not everything that happens, especially the most painful events in life, will we ever understand why it happens. And yet, the very bad things that do sometimes happen and must happen may actually lead us to something even better and greater than what we could have ever imagined. For instance, Faris wants to prevent her dad from dying in a terrible accident by telling him to do something differently the day it happens when she sends her D-mail to the past. In the new world line, she gets to spend many happy moments with her father but she never runs and works a successful maid cafe. What if the plan all along is, as a result of losing her dad, pushes her to be successful in business? She wouldn’t really know it unless she had lost her dad. A tragedy in her past eventually leads her to where she’s meant to be, a successful business owner and one her father could be proud of.

Okube, by the end of the anime, talks about an unknown future and how he’s okay with whatever will happen. Considering he spends the second half of the series carrying the weight of knowing when and sometimes how Mayuri will die, it must be a breath of fresh air to not know what will happen in the future anymore. It’s never good to undo decisions or actions we’ve made in the past. What’s done is done and we have to live with the choices we make. We might have some regrets, things we wish we could have done over differently, but the best thing for ourselves is to move forward and to live life differently and better than how we lived it in the past. 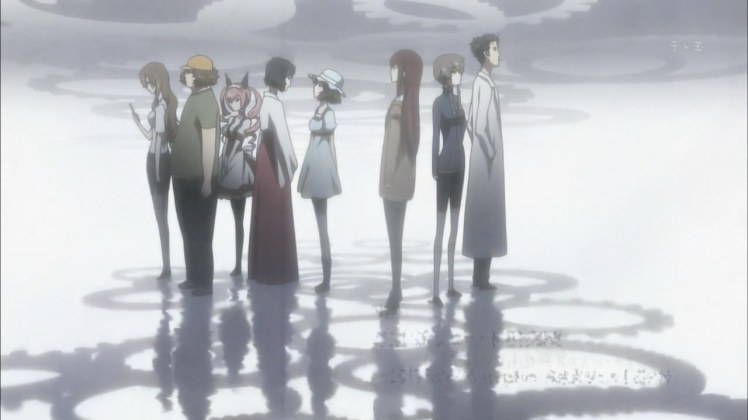 6 thoughts on “Turn Back Time: Steins;Gate And The Serious Consequences Of Time Travel”