As remnants of the summer season fades into the background to usher in the entrance of fall, September draws to a rapid close as October is nearly here. The cooler days and the slow down going on in my life right now has made this the prime time to see if I’d succeed at this month’s video game challenge. Before I officially say goodbye to the month of September, it’s time for you all to find out how well I did. 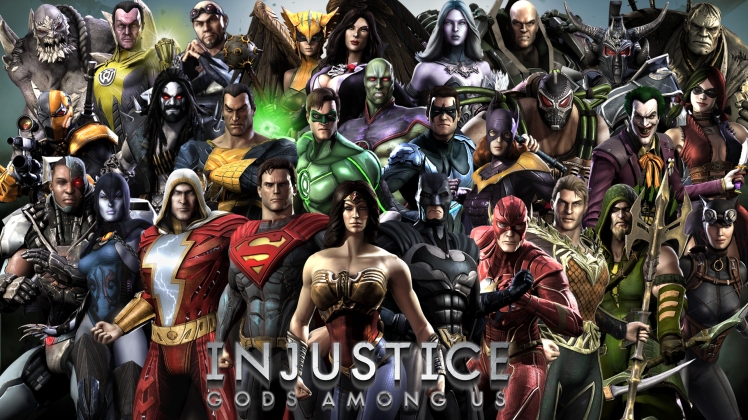 This month’s game choice is the DC Comics fighting game Injustice: Gods Among Us. The game has a single-player story mode I reported in my previous post that I’d play in the hopes of finishing. I’m happy to report that this game has officially been ticked off from my backlog of games as successfully completed. Well, at least the story mode. There are still more things to do in the video game, like missions and getting every single unlockable, but I’m not much of a completionist. Finishing the story mode, if a game has one, is satisfying enough for me. Injustice delivered it in spades.

The story of Injustice begins in an alternate universe where Superman gets manipulated by the Joker to destroy Metropolis and kill his wife Lois and their unborn child in the process. In a fit of rage and despair, Superman kills the Joker, which sets Superman on a dark and violent path where he and his followers rule the world with his frightening and dictatorial brand of justice. It’s up to the Batman of the alternate universe along with a number of DC Comic superheroes to put an end to Superman’s reign of terror.

The game is divided into a total of twelve chapters and each chapter is focused on a single DC Comic character the player gets to fight as. The story mode gives you a taste of what each principle character can do in terms of fighting combos and specials. Unfortunately, being a complete button masher when it comes to fighting games means I most likely didn’t get the full and proper experience of where each character’s strengths and weaknesses lie in their tailor made attacks and finisher moves. I managed to get by on button mashing alone and it carried me through from one chapter to the next. There were times I did die in some fights, as I played the entire game on normal, but usually I was able to overcome the fight without much difficulty.

There were some characters I liked more than others when I fought as them. Among my personal favorites from the game were Batman, Aquaman, and Green Arrow. I did enjoy playing as Wonder Woman by the time I got to her chapter, but I had major issues using her powers and fighting moves well. The worst of her moves I couldn’t master at all was when she switches from using her Lasso of Truth to her sword. I couldn’t figure out the right buttons to push to keep switching at will when I wanted to. Whenever I switched, it was done at random when I was mindlessly pushing buttons. I found her sword to be better in a fight than the lasso, but that’s my personal opinion.

The story was strong overall. I did enjoy seeing the darker side of Superman in this alternate universe and watching how many of the DC characters had fallen from grace in order to carry out Superman’s orders, whether they were doing it out of fear, shared sentiment on how the world should operate, or both. It was really intriguing to see the heroes go up against their double in the darker alternate reality. I often found fighting against their double a little harder to do because they’re matched in attacks and specials. The same move I was able to spam quite easily to overtake an enemy in one fight ends up getting used against me when I was up against their “evil twin.”

The graphics and design of the game were amazing to dive into and appreciate. The stages you get to battle in range from the beautiful to the dark and gritty. I haven’t played the game in regular fighting mode, but I hope to pause the game at least for a second to appreciate the detail and work that went into creating the world of Injustice. The look and style of each well-known and iconic DC character were just as cool to watch in action. There were many heroes or villains I want to be able to play at least once. My brief fight with Catwoman as Batman is one of those instances where I want to use her kittylike stealth moves in a versus mode. I particularly liked Wonder Woman’s pants instead of shorts look, but I did take issue with her super enhanced…um…chest size. Seriously? Her chest and body aren’t proportioned well and it’s unrealistic. Those things look like they can be weapons themselves! I guess I shouldn’t be too surprised since I did see that the ones who did this game did the Mortal Kombat games. Talk about women with unrealistic body types in that game.

My time with Injustice: Gods Among Us has been a blast. I look forward to playing the game casually on those days when I feel like beating something up. The regular fighting and versus mode are perfect for me and it’ll give me a chance to play as characters who weren’t featured so prominently in the story mode.

Come back next week when I pick my October challenge of the month. It’ll most undoubtedly be the last game I’ll be playing where the challenges have more variety. Why exactly? Why, November is Dragon Age: Inquisition month! That game will be my whole entire life until the end of the year. Maybe into the new year. Who knows? I may try to adjust my challenges based around Dragon Age, as some commenters have suggested in older posts. I’ll see what I can come up with.