You may recall how I’ve declared to attack my backlog of games by challenging myself to pick one game and sticking with it for the whole month. Depending on the game length, boss difficulty I encounter, and free time I have during the week and weekends, the effort is made with the intention of completing a game to the best of my ability. This may mean I may only complete the main story missions of a game, but not all or any of the side missions. As much as I want to get 100% completion for a game, let’s face it, I don’t have that much time to devote all my availability to doing that. With this month nearly over, I’m here to report my results as I promised.

Having a head start with KoA was a huge advantage for me when I picked this game as my first challenge. The main story quests I still had left to playthrough wasn’t too much of a daunting task. It was a lot easier than I thought. I was half-way done with the game, but got sidetracked doing the side missions offered throughout the world of the game. Once I left those alone and refocused on the larger story itself, it was smooth sailing after that.

I played the game on Normal and I didn’t encounter any real hindrances to my progress. Mini and big boss fights were easy to get through for the most part, maybe a few deaths once or twice, but that had more to do with making stupid mistakes or needing a little bit of time to figure out what the attack patterns were of my opponent. The only real problem I encountered was the very end of the game when I had to fight Tirnoch. It’s not that the fight was particularly hard to do, but it had more to do with an in-game camera angle problem of being in the precise spot to highlight the button to activate the final finishing move to end the game and defeat Tirnoch once and for all. It took several tries and a near rage quit to finally get to the end. 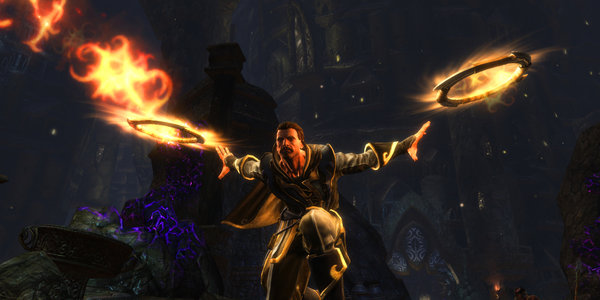 I managed to finish the main story ahead of schedule than I had previously thought. Instead of starting on a new game, I decided to do more of the side missions I haven’t finished. I did say I would devote an entire month to playing KoA and I wanted to stick with it. It’s not like there wasn’t anything left to play in the game. If there’s one game that will occupy all of your time for several months to come, if you choose not to play anything else, it would be KoA. There were optional side story lines to playthrough and I have completed a few.

Now that it’s truly the last week of February, I’m ready to leave this on my shelf with a sense of accomplishment. I would say this month has been successful in getting one challenge conquered. I do plan on doing a formal review and my personal thoughts on KoA in a few weeks, so watch out for that. What game will I choose to tackle next for March? You’ll have to wait and see.