Welcome to my very first guest blogger post for simpleek! C. T. Murphy of Murf vs Internet has written the following post that takes a different approach on my fashionista musing portions of my blog and gives it a gamer twist! He’s talented, and writes really great reviews and articles about video games. If you enjoy video games and are looking for more quality video game blogs to follow, then be sure to check out his blog after you read his guest post here. Follow him on Twitter. He’s funny and a great guy to tweet at. Now sit back and read this awesome article! You’ll be missing out if you don’t.

Many of us have been gamers since we were young. Over the years, we’ve seen all types and all sorts of games. After enough time goes by, you start to notice certain trends and similarities. Often, the characters we play as or interact with in our games shape our perceptions of the game itself. Sometimes, it’s the recurring themes and ideas in character design that we follow from game to game, rather than just going straight to the merits of a specific title.

Beyond picking a favorite genre or playing another sequel, sometimes you just want to play something with a damn ninja in it.

So here are my top five character themes in all of gaming:

They are cute and they are lovable: first up is every platformer’s best friend, The Anthropomorph. Not to be confused with The Animorphs, Anthropomorphs are animals given human characteristics. It’s not every day you see a hedgehog with hands, wearing boots, and sporting a cool 90’s attitude. Unless of course you are playing Sonic the Hedgehog.

What’s more awesome than playing a game as an animal that has hands and can talk? How else would I know what a bandicoot is? Actually, I’m still not sure, unless they have something to do with jumping on TNT and growing angel wings.

Plus, there’s nothing more appealing than peeling open a banana from the massive pile you horde in your treehouse – at least until they are stolen! Then you’ve got to wander off, find the slimey reptile who could do such a thing, and dodge cannon balls. Seriously, cannon balls hurt! They even hurt more than having a barrel smashed over your head. Repeatedly. 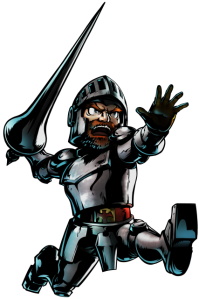 Saving princesses is tough work when you are just a plumber, so its best to call in a real expert. Typically, a story meme belonging to medieval literature, saving a damsel in distress is often the job for someone like Ghosts ‘n’ Goblins’ Sir Arthur. While I’ve certainly never bested Satan in that game, his schemes won’t fool me into leaving a gaming mainstay off this list: The Knight.

When you consider the influence of Dungeons & Dragons on video gaming, you quickly move beyond saving damsels to Knights with even more pressing matters on their hand. Ranging from being the chosen one to vanquish an evil Dragon, to someone who has just chosen to fall completely to the dark side, knights are featured in a wide variety of great games.

And why wouldn’t they be? Who doesn’t dream of taking your girlfriend out for a picnic in a graveyard only to be knocked out of your armor to your boxers by one of Satan’s many, many, way too damn many minions? Or gathering so much notoriety and prestige that hundreds of thousands of people flock to your frozen throne to see your defeat just because they want to loot your body.

If those fail, you can always be the asshole of the party who never lies, cheats, steals, drinks, has sex with unchaste women (rarely any women, really), is first to criticise, is first to chastise … twenty minutes later … first to say that something is a crime against Thorm, first to be racist toward a colored elf, etc. Oh, and you can really swing a sword – you are a real barrel of laughs. 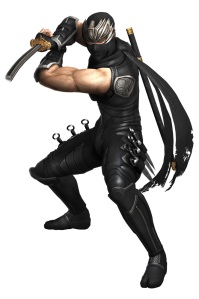 You may of seen this one coming, though I doubt you knew exactly when it would strike. Number three on our list can range from everyday cannon fodder to the puniest of protagonists. Sneaking out from the shadows, we have: The Ninja.

While I also considered tossing zombies on this list because they often die en masse in games to our favorite heroes, Ninjas have a similar death rate in the Gaming Ministry of Minions. Only, there is a major difference: ninjas often die to a single ninja. That my friends is what makes ninjas so badass.

Need more proof than that? Two words (with a million potential pronunciations): Ryu Hayabusa. The star of the classic gaming series, Ninja Gaiden, has proved for years that not only are ninjas cool, but they kick ass while being dressed in clothes that look exceptionally comfortable.

Seriously, fabrics that flow like that in the wind as you gaze at your market from the top of the building across an alley look seriously soft. Do you know why you’ve never seen a ninja sleeping? Trick question, ninjas are always sleeping – they just do it very, very lightly! That’s how incredibly comfortable those clothes are.

If you have ever seen a game character who clearly has malicious intent, often sporting some outrageous outfit and blurring the lines between male and female, then you may have encountered our number two on the list. Given the absolute out of this world design and the incredible amount of variety, it’s only fitting that this be a category completely unto itself: The Final Fantasy Villain.

But where should we even begin in describing this outrageous group? Long, silver hair and an even longer sword? A long dress where we aren’t sure if it is made of fabric, hair, feathers, or some twisted blending of all three? A clown? A woman emerging from a dark … cloud? The options appear endless, especially when you consider that the fantasy will never be final.

Still, you have to wonder where Final Fantasy villains find costumers without a single moral bone in their body or hair stylists that can straighten five feet of hair without ruining its silvery glow. Maybe they’d win if they dressed like a regular person and stabbed us while those damn Moogles are dancing.

We’d still win, actually, because we wouldn’t have to watch THOSE DAMN MOOGLES DANCING.

There is no better follow up to a good villain than a good hero, and no heroes kick more ass, slaughter more enemies, or have less personality than our number one selection. Boasting the world’s biggest arsenal of weaponry and decked out in so much armor that it’s nearly impossible to catch a glimpse at their face, number one is the badass supreme: The Space Marine.

Who needs character development when Weapons Development is working nonstop to make you a suit of metal that makes you quicker, stronger, and tougher than the Average Joe? When a horde of demons or aliens or alien-demons is staring you in the face, its best to call in those who we only assume has a face. The Space Marine is a gaming staple that has spawned countless, often needless sequels for our gaming enjoyment.

But what is the appeal of being silent (not like a ninja, more like a mute) and deadly (the sort of deadly you’d expect from a dire honey badger-shark bear hybrid)? Sometimes its rolling into a ball and hunting down a giant brain. Other times, you may find yourself in a Martian research lab, staring a hole in reality straight to hell. Or maybe its those times when you get to chat up that hot blue lady.

Hell, who are we kidding? It’s all about the guns, baby, the sweet, massive, loud, red cloud inducing guns. Without the guns, what else do you have? Definitely not a career in being personable … or speaking.