The toughest thing about being a shojo heroine is having to choose between two guys. In typical shojo fashion, the men are always good looking and one guy would be considered the “best friend” and the other is the “bad guy.”

In most cases, the heroine almost always chooses the “bad guy” before choosing the “best friend.” And in other cases, you have love triangles that keeps going without any clear resolution or an actual choice being made. In the spirit of Halloween, I’m going to analyze one such love triangle from Matsuri Hino’s manga Vampire Knight involving Yuki, Kaname, and Zero.

You will have to forgive me, but I’m behind on reading Vampire Knight at the moment. However, it is an ongoing series, according to the Wiki page, so I doubt Matsuri Hino has really made a choice for Yuki to choose between the two guys in her life. If someone has read further into the manga, then correct me if I may be wrong about this. I’m writing based on what I have read so far or have seen in the anime.

The set up from the very beginning is the fact that Yuki Cross has always had a crush/admiration for Kaname Kuran ever since he, a vampire, first saved her from a bad vampire one snowy evening when she was just a child. Kaname is sort of the cool, unattainable popular guy of the Night Class at Cross Academy. Yuki purposely and respectfully keeps her distance. It still doesn’t mean she doesn’t somehow find herself in a situation where she does end up in close proximity to Kaname. Whether it’s by accident or a calculated encounter, Yuki can’t seem to keep her distance from Kaname no matter how hard she tries.

Of course, Yuki’s longing for Kaname isn’t one sided. Kaname secretly harbors a secret flame for her as well. Without giving away too many spoilers for those who haven’t read the manga or watched the anime, there are reasons only known to himself and a few select others as to why he needs to keep his distance from Yuki. He is forced to watch and protect her from afar. Many of the decisions he makes are carefully constructed and executed with the sharpness and precision of a chess player. There is a great image of Kaname with a chess board and pieces as you can see below.

While Yuki sees Kaname as this really good and heroic person, there are other sides of Kaname she isn’t aware of. He is the perfect manipulator who seems to be one step ahead of everyone else. The chess board and pieces is a perfect image for Kaname because many of the people he encounters are all pawns in his grand scheme. He only makes decisions that really benefits him or his secret cause in some way. Kaname isn’t above using and disposing of people once their usefulness has reached its absolute maximum. This doesn’t quite make Kaname the villain, but it is obvious to the reader that he is a character with a lot of gray areas. Kaname can be the good guy, but he isn’t above getting his hands dirty when he needs to. In this love triangle, Kaname is the typical “bad boy” option for Yuki in the manga.

To complete the love triangle, we have Zero Kiryu in the role of the childhood best friend or the boy who grows up with Yuki. Zero has a painful childhood where his entire family, who are vampire hunters, are slaughtered by a vampire, leaving him as the sole survivor. Unfortunately, his survival doesn’t come without a price. He is bitten by a vampire, making it inevitable that he will eventually turn into one. When Zero is brought to Cross Academy as a boy by Yuki’s caretaker and surrogate father, Chairman Kaien Cross, the best that can be done is to put a tattoo over the bitten area on his neck to stall his transformation into a vampire.

Zero grows up into a cold, severe guy who has a deep hatred for vampires. The fact that he eventually attends and works as a school prefect at Cross Academy with Yuki is a kind of insult for all the pain he has endured at the hands of “blood suckers.” As the son of vampire hunters, Zero is going against his natural instinct to want to kill all vampires. At the urging of Chairman Cross and the school he has built, Zero has to maintain Cross Academy’s motto of pacifism and peaceful coexistence between vampires and humans (even if the human students themselves have no idea they are attending a school filled with vampires).

It’s very clear in the manga and the anime version of the series that both Kaname and Zero care for Yuki. Many times, at least in the early half of the series, both men are clearly in love with Yuki. They don’t actually say it out loud, but their actions toward her speaks volumes than words ever can. Kaname is jealous of Zero’s ability to get so close to Yuki while he has to watch his “special girl” from a distance. Zero is suspicious and distrustful of Kaname’s relationship with Yuki. Both men are always at odds with each other, but the one thing they can agree on is Yuki’s well-being above everything else. 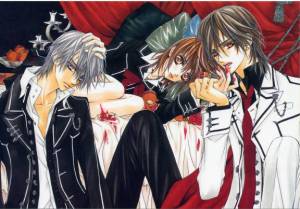 While Kaname and Zero are certain of their feelings for Yuki, it is Yuki herself who seems confused by her feelings. There is no question that she has always been drawn to Kaname. The way the manga plays out, it would seem Yuki is destined to be with Kaname. Yuki’s disbelief in the idea that Kaname will even glance her way keeps her from acting on her attraction toward him. Then there is Zero, the damaged boy who is welcomed into the Cross family. Yuki’s naivete makes her see Zero as a grumpy and at times a playful teaser toward Yuki. She doesn’t see Zero as someone who can be so much more than her friend.

Reading the manga up until my current collection of Volume 6, I have noticed that this is one series that seems to make it a little impossible to figure out who the mangaka wishes her main heroine to end up with. It may seem as if the canon couple is Kaname and Yuki, but somehow I don’t think it will be as easy as that. Zero is featured quite prominently in Vampire Knight, and it’s unusual for the “best friend” to have so much time in the spotlight. Zero can easily compete with Kaname for main hero status. What is also interesting about this series and the love triangle is that Zero has a very well-developed personality and back story. Shojo Corner wrote a really great piece about the nice guys in shojo manga, and what is definitely true in most manga that the blogger wrote is,

“…in most series, the nice guy isn’t fully fleshed out. He generally serves several roles in the story: he’s a threat to the ‘bad boy’ for the girl’s affections, especially since he’s often smarter and sweeter – he’s ‘perfect.’ He also is typically the person the protagonist can talk to about her worries.  However, beyond these functions the sweet love interest is typically not a well-developed character – we know little about his likes and dislikes, and he usually doesn’t have a strong personality beyond being nice.”

Zero goes against that idea of the “nice guy, best friend” archetype. He is a truly strong rival for Yuki’s affections. You know where Zero is coming from. You know why he hates vampires, why he acts the way he does, and why he is against Yuki getting involved with Kaname. This is why I think making an absolute call over who Yuki will for certain end up with isn’t an easy call to make.

I’m personally rooting for Zero over Kaname. At first I liked Kaname and wanted Yuki to choose him, but as more of his character gets revealed I can’t see him being good for Yuki in the long run. His secretiveness, lies, and underhanded dealings make him more harmful as a romantic partner compared to Zero. With Zero, he doesn’t feel the need to lie to Yuki. He is closed off at times and tries to push Yuki away when she tries to get him to open up, but ultimately he wants what is best for her without using manipulations in the same way Kaname does. What Kaname is doing isn’t exactly the recipe for a successful relationship. There has to be absolute trust. If you are always second-guessing your partner’s motives, the relationship is doomed to fail. There are also shades of Kaname being a control-freak. He always has to be in control of the situation. I have read some scanlations that goes beyond what is currently published in the U.S. Based on what I have seen, being with Kaname makes him want to control Yuki rather than love her. He claims he loves her, but Kaname’s idea of love is really warped.

With Vampire Knight as a really long and ongoing series in Japan right now, I feel Yuki will be seesawing between Kaname and Zero for quite a long time. The anime makes it quite certain that Yuki has chosen Kaname over Zero, but I still don’t believe that this is her final decision. Who knows? Zero may not have a chance at ultimately ending up with the girl as “nice guy” pairings in shojo seem to go against them, but I wouldn’t count him down and out yet.

Have you read Vampire Knight? What are your thoughts on the current love triangle? Are you a fan of the Yuki and Kaname pairing? Or are you more for Yuki and Zero? Please explain why you prefer one pairing over the other. I really like hearing people’s thoughts on why the main heroine should be with one guy over the other.