A good number of the shojo I watch or read tends to feature clueless main characters who don’t realize they in fact like or are in love with the main hero/heroine. I don’t know if there is a trope for this, but it’s a common and very predictable plot device. It becomes really obvious when a character may have more feelings of like/love than they like to believe. I’m going to break down the following characters who fall into this category. 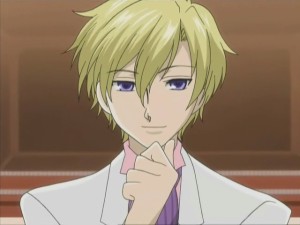 When Haruhi joins or is forced to join the Host Club to work off her debt to them, Tamaki fusses over her like a surrogate father. In dramatic flourishes he says things along the lines of, “Daddy wants his daughter to wear this,” or “Daddy does not accept this.” There are a bunch of similar sounding declarations all throughout the series. When it comes to him actually questioning what his feelings are for Haruhi, he still insists on viewing her as a father who loves his daughter. I haven’t finished reading the manga series itself, but from the summaries I have encountered, this family role-play Tamaki does is later explained in the manga as him trying to cope with his own childhood trauma stemming from his parents’ forced separation. As he tries to move past the trauma, his feelings of love for Haruhi is absolutely blocked out. In time, he does realize what he feels for Haruhi is a love a man and a woman feel for each other and not one that is familial.

Tamaki is a great example of a hero not aware of his feelings for the heroine until a moment of clarity happens. Once Tamaki gets it, he is able to properly act on them instead of denying how he really feels, and confusing his romantic feelings for one of fatherly love.

Tanpopo of Imadoki!: Tanpopo is similar to Tamaki. They are both characters with innocent, almost childlike personalities. Tanpopo comes to Meio Academy with the intention of making friends and to make her high school experience in the big city memorable. When she encounters the cold and aloof Koki Kugyo, she makes it her absolute goal to make him her friend. Once the friendship gets established between these two, Tanpopo is still a bit slow at catching onto the fact that she has started to develop feelings for Koki. She tries to rationalize her feelings as care and concern for a friend and fellow club member.

It doesn’t take the whole entire series for Tanpopo to realize she does have feelings for Koki like it does for Tamaki with Haruhi. She discovers after a while (and with some prodding from her own friends) that what she has for Koki is no longer friendship, but strong feelings of love.

Syaoran of Cardcaptor Sakura: Syaoran starts off as Sakura’s rival for the Clow Cards. He’s a bratty and annoying kid who keeps trying to hamper Sakura’s efforts in collecting the Clow Cards. And if the Clow Cards aren’t enough, both him and Sakura are rivals for Yukito’s affections!

Eventually, Syaoran’s feelings toward Sakura and Yukito are sorted out, and he realizes Sakura is the girl he has come to love. This realization comes with huge amounts of blushing, stumbling, and uncertainties of how to act around Sakura and his new found feelings for her. Syaoran always thought what he felt for Sakura was an intense dislike for her when in reality he truly found himself caring for the fair cardcaptor. I am quite glad Syaoran wakes up and realizes he wants to be with Sakura. The ensuing courtship and stolen glances are just too cute not to watch.

Haruhi of Ouran High School Host Club: I know I have selected another character from Ouran, but in this case, we have two main leads who are in denial of their feelings for the other. Both Haruhi and Tamaki rationalize their feelings in ways which obviously avoids the “L” word. Tamaki arrives at his feelings of love for Haruhi a lot sooner than Haruhi herself.

Based on the summaries I have read about the rest of the volumes in the series, Haruhi takes a frustratingly long time to admit she has come to love the dramatic king of the Host Club. Most of the time she dismisses her affections toward Tamaki as him being a hopeless idiot that just gets on her nerves. For better or for worse, this series does take its time to have the two main characters give into their feelings for one another. The series actually takes its time to develop the relationships and friendships of these characters, and makes their interactions with each other feel natural and believable. Of course, it drags out the epiphany moment for the main heroine to accept she has fallen for the main character, and how she deals with those feelings afterwards. Most other shojo series don’t take this long to arrive at this point.

What a lot of these characters I have selected seem to have in common is their goals or misunderstandings about their feelings for their potential love interest get in the way of actually realizing their true romantic feelings, which has always been residing deep within the recesses of their hearts. Something keeps them from properly coming to the conclusion a lot sooner. Tamaki has to deal with his past family trauma, Tanpopo has always been set on making strong friendship bonds that she doesn’t even think of the possibility of a romance with anyone she becomes friends with, Syaoran is focused on collecting the cards for himself and is intensely drawn to Yukito’s innate powers that it muddies the connection he gradually builds with Sakura (whether he willingly wants to or not), and Haruhi is more concerned with strictly seeing Tamaki as the silly idiot she has to deal with on a daily basis that she doesn’t open up her mind and heart to the possibility of romance.

The clueless hero/heroine may be a common plot device in shojo, but how they handle the awakening of their feelings is a journey that becomes rife with watching these characters try to step into territory that is uncertain and new to them. Love is complicated, but it also shows how rewarding it can be when your heart is open to the possibilities.

Are there other characters who you feel fall into the category of clueless hero/heroine who doesn’t realize they are in love with their best friend/rival/club member? Do you enjoy watching these characters realize their true feelings while you already knew it was obvious from the start what their feelings actually are?