As promised, here is my anime review for the second half of the Clannad series which is Clannad After Story. After Story picks up where the first season left off. A bunch of episodes focus on other characters that haven’t really been focused on in the first season such as Youhei’s relationship with his younger sister, Youhei’s dorm room headmistress Misae Sagara––to name a few. Like the first season, the secondary characters who get their own episode arcs also have issues that need to be dealt with or settled for them to move on with their life. As usual, Tomoya is at the center of these characters’ issues and helps them confront whatever is holding them back in order for them to move forward.

It’s also in this season where you get to see all the characters graduate from high school and start the next phases in their lives. Everyone has an idea of what they want to do after high school––some plan to go abroad to study, others will go to a local college, and some will go straight to the workforce. It never really occurs to Tomoya as graduation nears what he should do with his life post-high school. He realizes he has been more focused on getting out of school that he hasn’t really thought about his future. You can tell things have changed a lot for Tomoya since season one. He is no longer the loner, delinquent kid but a guy who has more friends he cares for, a girlfriend he would do anything for, and he actually wants to be in school. 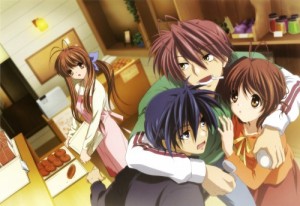 After Story sees the maturation in Tomoya’s life as well as the continuing growth of his and Nagisa’s loving relationship with one another. Eventually he decides he wants to be more independent. He secures a job as an electrician and manages to move into his own place. Tomoya is confident and certain he wants to spend the rest of his life with Nagisa and asks her to marry him. There are episodes in the anime that depicts Tomoya’s and Nagisa’s relationship as a married couple which is simple, warm, and full of love. Time passing is signified through the change in seasons. In time, Nagisa becomes pregnant with their first child. However, the pregnancy is overshadowed with concern. Because Nagisa has always been a sickly person since she was little, the chances of her delivering the baby without it taking a toll on her health is very slim. Either way, it doesn’t stop Nagisa from having the thing she wanted most since marrying Tomoya which is to have her own family.

This is where After Story becomes the most roller coaster of emotions plagued season of the series. Nagisa manages to deliver a healthy baby girl named Ushio with Tomoya at her side throughout the entire birth. As predicted, Nagisa has been severely weakened by the birth and dies after managing to take one last look at her daughter and her husband. To say Tomoya is thoroughly broken by Nagisa’s death is an understatement. The episode where their daughter is born but her mother dies effectively puts on display two conflicting emotions. The birth of Ushio should be the happiest day of Tomoya’s and Nagisa’s lives, but the happiness is dampened with the passing of Nagisa herself.

The rest of the episodes show Tomoya’s life five years after Nagisa’s passing, and it isn’t necessarily good. The vibrancy, the color in his life is back to the bleak, gray tones you see in the very first episode of Clannad. Tomoya finds himself doing everything in his power to forget the death of Nagisa. He takes more shifts at work, he gambles, and he smokes. He purposely remains separate from his daughter Ushio, and the viewer finds out that Ushio has been raised mainly by Nagisa’s parents. For five years of Ushio’s life, Tomoya has become the absent father. In an attempt to get Ushio and Tomoya to connect with each other, Nagisa’s parents trick Tomoya into thinking that he and them will be taking one big trip together.

When Tomoya shows up at the Furukawa’s for the trip, he finds both Nagisa’s parents gone with a note stating that an emergency has come up and for Tomoya to look after Ushio. The moments between Tomoya and Ushio as father and daughter get acquainted with one another for the first time in years is both awkward and sweet. Tomoya is unsure of what to do or say to his daughter and Ushio manages to be cute and innocent around the father she barely gets to know until now. With a little bit of forced interaction, a trip Tomoya decides to go on with his daughter (minus her grandparents), and Ushio’s sweet charm allows the father and daughter to bond. It’s during the trip that Tomoya realizes how stupid he has been for neglecting his child for as long as he has and promises Ushio that he will never leave her again.

With his new resolve, Tomoya takes over the care and responsibilities of caring for Ushio from Nagisa’s parents and Ushio moves in to the same apartment Tomoya and Nagisa used to share together. Having Ushio around allows him to find new happiness as well as help him accept and cope with the death of Nagisa.

I really don’t want to get into how After Story ends since it will spoil it for those who haven’t watched the series at all. The only thing I can say is that Tomoya really undergoes a lot of trials in his life. He faces a lot of ups and downs, and he is presented with the ultimate decision that could effectively change everything for him. The end of the series has also received mixed responses from what I’ve read in forums and discussions about the end. Some thought the ending was unrealistic and cheap. Others thought it was the best way to end the series, especially if you have ever played the game. Those who have played the game describe how the anime is in keeping with how the game itself plays out, and there are clues scattered throughout both seasons as to how the anime comes to the conclusion it does.

Tomoya’s character development is really solid in After Story. You see him come a long way from the bitter, withdrawn kid from the beginning of the series to the man he is meant to be. Parts of After Story feels very realistic to what most people go through in life: pain, sadness, loss, joy, friendship, family, and love. All these themes are very well depicted in both seasons. I have to warn you that you will be crying your eyes out once you reach the second half of the second season. This is where all the emotions are at its rawest. The viewer’s connection to Tomoya and everything he has been through really aims straight for the heart. It’s amazing to watch Tomoya try his best to move on with his life without Nagisa, forgives his father, and doing what he can to make up for the loss time with Ushio. Although, the last few episodes before the final one is really too cruel and feels like a knife to the heart when you see them.

Between the two seasons, After Story is my favorite of the Clannad series. This season bleeds you dry of every emotion you can think of as you watch the series, and I particularly enjoy the character arc Tomoya goes through. The love Nagisa and Tomoya share is absolutely beautiful too. Watching them become adults and how they deal with the real world together truly brings out what makes these two so right for each other. You want nothing but the best for them.

Like the first season of Clannad, I highly recommend After Story. Of course, don’t watch one season without the other. You won’t get the full experience of this story without watching both consecutively. This series is the deepest you can get for a slice of life anime without it feeling generic or contrived.