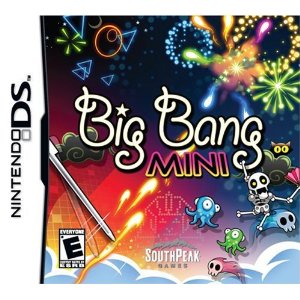 It has been a while since I’ve done any actual reviews of anything so I’m going to review a game I have been playing a little at a time.

Big Bang Mini is a cute puzzle game by SouthPeak for the Nintendo DS. This game makes good use of the touch screen and stylus.

When you first start up the game, there are a few options you get at the beginning. Playing Arcade mode will unlock additional content in the game once you complete everything in this mode. The other option is using the online Nintendo Wi-Fi mode to play against your friends. I haven’t played against anyone using the Wi-Fi, so this review will be based off of playing Arcade mode.

The game is straightforward. The Arcade mode sets up levels according to famous cities or places around the world. Only one place is unlocked at a time. There are nine levels in total to complete. I’m currently on Level 6 which is the New York level.

At the start of each level you get little obstacles/creatures in the sky you have to flick a streak of light at to make them burst into a sky filled fireworks display. There is a little triangle or circle that you have to protect from getting hit from the fire sparks debris or the obstacles’/creatures’ own firelight launchers by moving it around the touch screen to avoid them. As you try to avoid getting hit from these things you also need to collect the stars that come out of the obstacles/creatures after they burst into fireworks. Gather enough stars to fill the gauge on the left hand side of the screen and you pretty much complete the entire stage. Once you finish all nine stages, then you get to play the level’s boss fight represented as a crown icon.

The boss fights has the same flick and and fire gameplay you use throughout most of the stages in the levels. Nothing really special. Just flick and avoid. The only difference between the boss stage and regular stages is the boss stage has no stars you need to collect. It really is all about defeating the boss so you can go onto the next level.

For a puzzle game, it may sound easy to flick balls or streaks of light at the varied obstacles or creature things you encounter in this game but it’s a lot harder than it sounds. Each stage also ends with an optional bonus round where you connect fiery dots to form a picture that goes with the theme of the city or place you are currently playing at. The bonus parts get harder as you progress in each stage as well.

Each level also eventually upgrades your fire power. One upgrade has you pressing your stylus down on the screen and holding it long enough before you release it. When you release it, you will get a bigger and much stronger ball of light to do heavier damage on the things in the sky you are trying to explode.

I find this to be a very fun and casual puzzle game to come back to on a rainy Sunday kind of day. The game also keeps you on your toes. You really have to think about how to get around the shields the sky creatures eventually use like clouds. Flicking becomes much more strategic. I had a hard time with some of the stages over a time, but eventually I got through them.

There’s something very satisfying about watching the sky creatures explode into beautiful colors of light and sound. You as the gamer get to create the fireworks show just by playing the stages. I would recommend this game for the puzzle lovers out there.