This entry is what I would like to call the first in my Geeking Out series where I will be giving a very detailed opinion on what is particularly high on my Geek-o-meter these days. To kick it off, I want to write about ABC’s new fall show of the season Once Upon a Time.

The show comes from two Lost alums Adam Horowitz and Edward Kitsis. As a lot of critics have been saying about the show, it’s fairytale meets real world. Being a huge fan of Lost when it was still airing on ABC, Once is a very character driven show with a large story canvas to work with just like Lost. What made Lost a really great show was the characters. They were relatable and you cared about what happened to them. I feel this is the case for Once Upon a Time.

that was different from what was being aired at the moment. The same can be said about Lost when it first debuted on ABC. I think what convinced me to give the show’s pilot a try was the fairy tale concept. I’m a sucker for fairytales, romance, adventure, and the good vs. evil themes. Upon watching the pilot, I found myself slowly falling in love with the show from the start. You could say the show did it’s job and cast a spell over me. 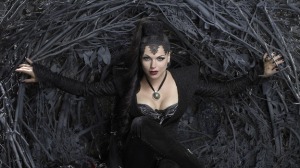 The town’s lack of knowledge of who they really are is due to a curse the Evil Queen unleashed on them all. She is hellbent on destroying the happily ever afters of everyone in the fairytale world and securing her own happy ending. The curse transports herself and everyone from the fairytale world to the real world, complete with new identities and real lives. The Evil Queen becomes Regina who is conveniently the mayor of Storybrooke. Only she seems to have knowledge of their former lives, and is in control of how things are run in the town. Before the curse descends, Snow White and Prince Charming manage to save their daughter from it with a little magical transportation of their own. Being spared from the curse, Emma Swan becomes the key to breaking the curse and freeing the fairytale characters from their fate. 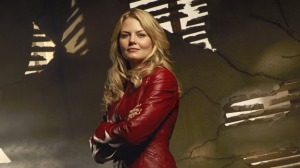 not surprisingly the adopted son of Regina) reappears on her 30th birthday to bring her back to Storybrooke. Henry, aside from Regina, is the only one who knows the real identities of the townsfolk of Storybrooke, and he tries to convince Emma that these people are trapped under a curse. Emma is skeptical of Henry’s story, but she agrees to go with him. And so starts the interesting power struggle, good vs. evil dynamic between Regina and Emma.

I want to start by saying that the casting for this show is amazing. Ginnifer Goodwin as Snow White/Mary Margaret fits her so well. She has the sweetness and kindness of Snow White. Lana Parrilla as the Evil Queen/Regina is deliciously evil as the red apples she grows in her garden. Every time she smiles, you know Regina relishes her role as puppeteer and master over everyone’s lives. Finally, Jennifer Morrison as Emma Swan brings the right amount of realism and no nonsense attitude you would expect from a character who just can’t quite buy into what Henry is telling her. Fairytale characters? Curse? Is this kid for real? Her expressions are priceless as the very serious and deadpan Emma.

What is very striking about this new show is its focus on strong women. I enjoy watching the verbal spars between Emma and Regina. It’s comparable to watching a very intense chess match. These women refuse to back down and their moves in response to each other is carefully calculated. Regina is nervous and displeased about Emma’s determination to stay in town for a while, and she has no problem making it known to Emma. The only thing Regina can see right now is Emma being a threat to her relationship with Henry. It becomes pretty obvious after Episode 2 of The Thing You Love the Most that Regina has no idea just how big of a threat Emma really is to her. It goes beyond Regina’s relationship with adopted son Henry. Emma’s only concern is to make sure Henry is in good hands. If it means playing along with Henry’s idea of cursed fairytale characters then she will. What is undeniable to Emma is a feeling that there is something about Regina that is unsettling. She has every reason to worry about Henry’s mother.

world is also intriguing. I find it funny to imagine Snow White as a teacher or Jiminy Cricket as a town therapist. Not something I ever thought about growing up with these fairytales. But by giving these fairytale characters real professions with real world problems, it makes these characters realistic and easy to care about. Mary Margaret is a kindhearted person who deserves happiness, but she walks through her life in Storybrooke feeling very lonely and at times empty. You can see it in her expression that something is missing in her life. The Evil Queen/Regina has succeeded in destroying Snow White’s happiness as she promised. Everyone has felt loneliness and emptiness at some point in their lives. Watching Mary Margaret, you root for her and hope that somehow she will be able to remember who she is and be reunited with her love and soul mate Prince Charming/John Doe in the real world.

The creators do a great job making the fairytale character story flashbacks have more depth rather than making them two-dimensional. Episode 3 entitled, Snow Falls, is a good example of that. They flesh out the characters of Snow White and Prince Charming beyond the Disney version of these characters. Snow White is more than just a delicate beauty––she has spunk and is capable of taking care of herself. The meeting of Snow White and Prince Charming is not immediate love at first sight. They do meet cute and all, but it takes time for them to warm up to each other. And the prince has a name! I was hoping Prince Charming’s name wasn’t Charming (it’s James as he tells Snow White). I’m still having a hard time getting over the fact that any girl’s first name would be Snow. Either way, kudos to the writers and creators for fleshing the fairytale counterparts of the townsfolk of Storybrooke. 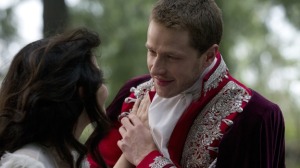 The show is absolutely charming. I really do hope this show will stick around for a good several seasons. The ratings for the show appear positive. The world already seems bleak with talks of the economy and everyone feeling frustrated and hopeless about this country’s situation. Watching Once Upon a Time helps you escape from the drudgery of life, and sucks you into a world where everything is beautiful, strange, and inviting. This is one of those shows where you want to enjoy the ride for as long as possible. I am eager to see where they take this series and how everything will get resolved once the show has reached its final conclusion.

If there are any fans or non-fans of the show out there, let me know what you think of it by commenting.