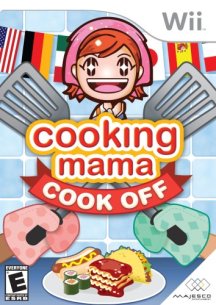 One of the games that have gotten me into playing and owning the Wii/DS back in 2009 was the Cooking Mama games. I finished Cooking Mama: Cook Off for the Wii a while back. The game is simple, you select a recipe and then follow the onscreen instructions to crack, chop, and fry your way into Mama’s good graces to award you with a gold, silver, or bronze medal. There are plenty of recipes to unlock coming from different countries around the world. The graphics in the game are nicely done, and for animated food it looks pretty mouth watering inducing in my opinion.

I know the Cooking Mama games are not going to be for everyone. Most hardcore gamers may even find these games boring as hell. There isn’t anything else going on in the game other than the desire to unlock all the recipes and strive to get a gold medal at the end of each recipe you complete. It is, to put it simply, an easy game with no challenge.

The Cooking Mama games are one of those no-brainer games where you pop it into your system if you aren’t looking for a challenge or concentrating on advancing a story. I don’t know about any of you, but sometimes I just want the no-brainer games to play from time to time. After getting stuck on boss fights or playing a free-roaming RPG where you spend hours trying to figure out where you need to go to next, you need a game that doesn’t require strategy. It also helps the sanity a great deal, and you won’t want to nearly throw your console out the window or even your controller at the TV on a daily basis either.

The DS games for Cooking Mama such as Cooking Mama, Cooking Mama 2: Dinner With Friends, and Cooking Mama 3: Shop & Chop have the same game mechanics as the Wii version. The only difference is you are using a stylus to cook the recipes. Cooking Mama is just the DS version of the Wii one. Cooking Mama 2 & 3 add some additional features in the game. Cooking Mama 2 allows you to do the recipes with Mama’s family members and friends as the title of the game suggests. Cooking Mama 3 I own but haven’t gotten around to playing with too much yet. From what I know of playing it so far is it has mini-games you can play, which involves shopping with Mama. There is also an option in the game to combine different ingredients from other recipes to create a new recipe of your own making to cook for Mama.

The other Cooking Mama for the Wii I have played, but do not particularly like is Cooking Mama World Kitchen. The graphics in this game is an improvement on the first Cooking Mama, but the difficulty level for cooking recipes is absurd. Peeling, frying, adding ingredients, and stirring makes it next to impossible to finish these tasks before the timer runs out. Getting anything above a bronze medal is also unlikely to happen. I was lucky if I even got a silver by the end of the cooking session for a few recipes. I also find my arms tired after cooking one recipe alone. One! It really is irritating. This is one Cooking Mama game I would not recommend anyone to get. I believe this is the worst installment in the Cooking Mama games.

Maybe the creators at Majesco were trying to find ways to make the second Cooking Mama more of a challenge for the Wii. Except they fail miserably at making this game fun. It is a challenge. However, for a casual game you just want to pick up and play for a few hours you get more work than fun out of this. At least the first Cooking Mama hasn’t made my arm ache after so much shaking and winding to finish a recipe task before the timer runs out and before Mama can berate you for not trying hard enough.

My final thoughts on the Cooking Mama games are this: if you want a casual game and you are not easily bored by having your only main objective being cooking and unlocking recipes, then this game is for you. If you are bored by such games and think it’s pointless to play a game about cooking when you can just head into a kitchen and actually cook for real, then skip it.