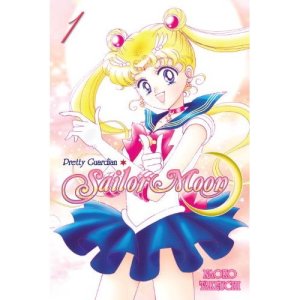 When I first saw on Amazon that the Sailor Moon manga was going to be re-released under Kodansha Comics in the USA, I wasn’t entirely sure if I wanted to go through the trouble of buying the whole series again. I did read somewhere on the web that Kodansha will be revamping the translations and keeping the Japanese names of all the characters and the Japanese cultural references, instead of Americanizing it for the U.S. market like the now defunct Tokyopop did.

I bought up all volumes done by Tokyopop back when anime and manga was slowly gaining in popularity in America. Sailor Moon will always have a soft spot in my heart. It was the first anime and manga series that introduced me to anime and manga in general. If you want to get technical, I do remember seeing old reruns of Speed Racer when I was a little girl in the late ’80s. In reality anime had already infiltrated American television screens. I’m sure like most people growing up in the ’80s, you probably didn’t realize that the “cartoon” was in fact an import from Japan and dubbed with American voice actors. That’s a whole other topic of conversation though.

Sailor Moon made me fall in love with shojo, fall for the beautiful artwork and stories done by the mangakas, and Sailor Moon was sheer escapist fun. If it wasn’t for Sailor Moon, I wouldn’t have discovered all the great shojo mangas out there.

I eventually bit the bullet and decided to buy the first volume of the newly re-released and translated Pretty Guardian Sailor Moon on Amazon. I’m still a few more pages away from finishing the book, and I can confidently say that I do not regret my purchase. I was completely sold on the fact that the Kodansha version included the color artwork in the first few pages of the book, which I believe is typical of the Japanese published mangas. Being able to appreciate the gorgeous artwork done by Naoko Takeuchi is exactly how it should have been when Tokyopop first had the rights to translate it.

I could go into detail about what my thoughts are on reading the new Kodansha version, but I will save that for a future post. I plan on rereading the first volume of the Tokyopop version to make comparisons, but I have a feeling that Kodansha will be trumping Tokyopop’s automatically.

I’m very excited that Kodansha also is in the process of releasing Naoko Takeuchi’s other manga, Codename Sailor V, for the first time here in America. I can’t wait to buy and read about the other Sailor Scout’s independent story. There must be some kind of tie-in with the Pretty Guardian Sailor Moon storyline somewhere in the Sailor V series, but we will see.